This weekend’s Blancpain Endurance Series season finale at the Nurburgring will bring to an end Harold Primat’s 17-year motorsport career following the Swiss ace’s decision to call time on his competitive racing exploits.

Germany’s round of the pan-European GT championship will see Primat climb aboard the #84 Bentley Team HTP Continental GT3 one last time before hanging up his helmet for good.

The 40-year-old feels now is the right time to begin a fresh chapter in his life and focus on other projects. However, before that and this weekend’s last hurrah, he wanted to reflect on a somewhat unconventional career, from his late start in single-seaters through the sports-prototype ranks via a works Aston Martin Racing seat to his current spell in GTs.

This, then, is Harold in his own words.

Motorsport has changed a great deal since I started out 17 years ago. Today we have drivers racing in Formula 1 aged 17 and young pros entering the sportscar ranks straight out of junior single-seaters. My route was very different: I didn’t race a single-seater until the age of 23 when I went to the US for a stint in Formula Ford 2000. I’d been a Winfield finalist in France but that was my first proper schooling. Two years in British F3’s Scholarship class followed, which was a big jump. I had some success but my lack of experience was evident compared to those who’d raced karts since they were eight!

Nevertheless, in 2003 I made the move to F3 Euro Series. Again, it was a big jump and I was racing against the likes of Nico Rosberg and Robert Kubica. I think they went on to do pretty well for themselves! Again, my lack of experience proved a factor but I wasn’t ready to give up on single-seaters and by doing World Series by Nissan the following year ended up meeting a man who would have a big impact on my career.

It became pretty evident during 2004 that it didn’t make sense to continue in single-seaters and that it was time to look elsewhere. Youngsters switching to sports-prototypes has become a genuine career move over the past couple of years but back in 2004/5 it was virtually unheard of!

Having coming close to winning the French V de V endurance championship alongside my World Series programme I felt confident of moving to LMP1, and when the chance came with Rollcentre Racing’s Dallara-Nissan I jumped at it. Together we contested most of the Le Mans Series and my first Le Mans 24 Hours. I also had an ALMS outing at the start of the year aboard the Kruse Motorsport Courage C65-Judd. Results were mixed but I’d been bitten by the sportscar racing bug. That’s when Serge Saulnier and I started talking about a special endurance project.

Serge and I had worked together previously when he ran me in World Series by Nissan and European F3, and together with a journalist friend decided to create an-all Swiss team. Swiss Spirit was the result. Serge also knew Marcel Fässler, who’d been a DTM title-contender with Mercedes before switching to Opel in 2004. Things hadn’t gone so well with the Vectra, though, and he was keen to show what he could do in a sportscar.

2006 in the ELMS was one of my favourite seasons. The Courage LC70-Judd LMP1 was a good package but we had no right to be mixing it with the likes of Pescarolo. I remember Marcel putting it on pole first time out in Turkey and we had a couple of podiums too before finishing fourth overall in the points.

It was a big season for all of us. Serge subsequently got the call to head up Peugeot Sport’s new LMP1 team, Marcel laid the foundations for his very successful sports-prototype career and I moved on to Pescarolo’s works outfit. I think we all look back on that year with fondness.

PESCAROLO, LE MANS AND BEYOND

I enjoyed two happy years with Pescarolo when they were at the height of their powers. The 01 chassis and Judd V10 proved a potent a combination, and working with Henri was obviously such a privilege. 2007 was good but it was the following year at Le Mans that we had what I consider to be one of my best results after finishing first of the petrol-powered cars and seventh overall. We really didn’t stand a chance against the Audi and Peugeot diesels, which is why seventh felt like a win.

I was happy at Pescarolo but in 2009 had the chance to join Aston Martin Racing’s new factory LMP1 team. Again, it was an honour to race for a manufacturer like that. The Lola-Aston was also my favourite car I ever drove; its beautiful styling, iconic Gulf Oil livery and that screaming V12 engine were all amazing. There was nothing like it then or now, for that matter.

Winning the Asian Le Mans Series round at Okayama in our first year alongside Stefan Mücke was a highlight, but at Le Mans myself and Peter Kox had to complete most of the race distance after Stuart Hall was harshly penalised and prevented from driving. We were coping pretty well until a water leak pitched me into the Porsche Curves tyre wall. That came as a real blow having battled so hard for most of the race.

We had some good results the following year as well – most notably third at Sebring – but it wasn’t until 2011 that we really got the car sorted. That was the season of our ill-fated AMR-One with the radical 2-litre straight-six turbo engine, which caused so many issues. After a disastrous Le Mans we went back to the old coupe which myself, Adrian Fernandez and Mücke drove to victory at Laguna Seca and third at Petit Le Mans.

Aston canned the sports-prototype programme to focus on their GT programme after 2011, but as I wasn’t ready to move disciplines I opted for Rebellion Racing’s Lola LMP1 and the inaugural FIA World Endurance Championship. As with Pescarolo we were never going to be a match for the factory teams but I still enjoyed my time racing the coupe and scored a couple of Privateer wins during the season.

I guess it was during that 2012 season that I realised anyone in a non-factory LMP1 car was never going to challenge for outright victories, hence the GT switch. I’d never once raced a GT car before joining Phoenix and took some time to adapt to it, actually. LMPs are much lighter and have more downforce, so hustling a heavy GT car around takes some getting used to.

In truth we never got the most out of the Audi R8 LMS ultra in the Blancpain Endurance Series due to that year’s BoP, aside from the Spa 24 Hours where we finished fourth overall. I was still more comfortable with the longer races and really enjoyed my first experience of the Bathurst 12 Hours where we finished fourth. It’s a race that’s gained a lot more momentum recently and I personally love it.

Bathurst was again high on my list of priorities when I raced the HTP Mercedes there in 2014. Again, that event holds fantastic memories for me after coming so close to winning it. We finished second but only by four tenths! Seventh overall on my first appearance at the Nurburgring 24 Hours was also a great achievement, as was fighting for the Blancpain Endurance Series title right up until the final round.

For one reason or another things haven’t gone quite so well this year but I’m still proud to have been the first non-German car home at the Nurburgring and also the highest placed Bentley in eighth. Fifth in the Pro Cup class at Spa this year was equally impressive. Beating the works cars in both meant a lot!

IT’S ALL ABOUT TEAM WORK

I’ve been lucky enough to partner some amazing drivers down the years.

Marcel is obviously up there along with Mücke in terms of raw pace, and it was an incredible honour to partner Bernd Schneider at HTP last year. The guy’s definitely still got it! I also raced with Benoit Treluyer at Le Mans in 2007, while Maxi Buhk was always very, very fast in the Mercedes.

But there are a couple of guys who really stand out from a personal perspective. Christophe Tinseau would be the first from our time together at Pescarolo in 2007-08. We were always willing to help each other and enjoyed a very good working relationship. He knew that car inside out, too.

Adrian Fernandez is another. We were Aston Martin team-mates in 2010 and ’11 and, honestly, I couldn’t have wished for a better co-driver. He was very quick but also completely open about why, where and how. He’d never withhold any information and we developed a close personal as well as professional relationship. I’ve always been very grateful for the things Adrian taught me during those two years when we shared some memorable results together.

I also need to mention Christopher Brück. He’s much less of a household name but still amazingly quick at the Nurburgring Nordschleife, where he specialises in VLN. We raced together in this year’s 24-hour race there and got on very well indeed.

I’ve mentioned a few. Seventh at Le Mans in 2008 was definitely a standout moment along with second at Bathurst last year when we came so close to winning it. I’ve also had some good results at Spa and the Nurburgring’s 24-hour races, while the Sebring podium was also unforgettable.

However, I’d probably go for the Laguna Seca victory alongside Adrian and Stefan Mücke in 2011 as being my favourite moment. Aston Martin had endured such a frustrating year with the AMR-One and weren’t all that competitive after switching back to the old coupe. However, after taking a few races to find our feet with some new regulations I remember we were really on it at Laguna. It was probably the first time in the Lola-Aston’s three years of competition that I felt completely at one with it. That day with that car, engine, and drivers was an utterly fantastic experience.

After 17 years I feel like now is the right time to step away from competitive racing. I’ve had a great career but there are other things I want to spend my time doing and I see this as the start of a new chapter. Yes there will be opportunities to do one-off events, but if I can’t commit fully and properly to something then I don’t think it’s worthwhile for myself, the team or my co-drivers.

My partner Cassie is also expecting our first child, which I guess subconsciously has also played a part. I’ve got a couple of things lined up that will hopefully keep me involved in motor racing, although they’re still a long way down the road.

For now I’m just going to enjoy this weekend with Bentley Team HTP. I’ll undoubtedly miss the camaraderie that exists in the paddock and garage, not to mention the adrenaline rush. Hopefully we can go out with something to celebrate. 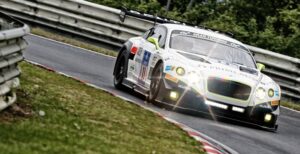